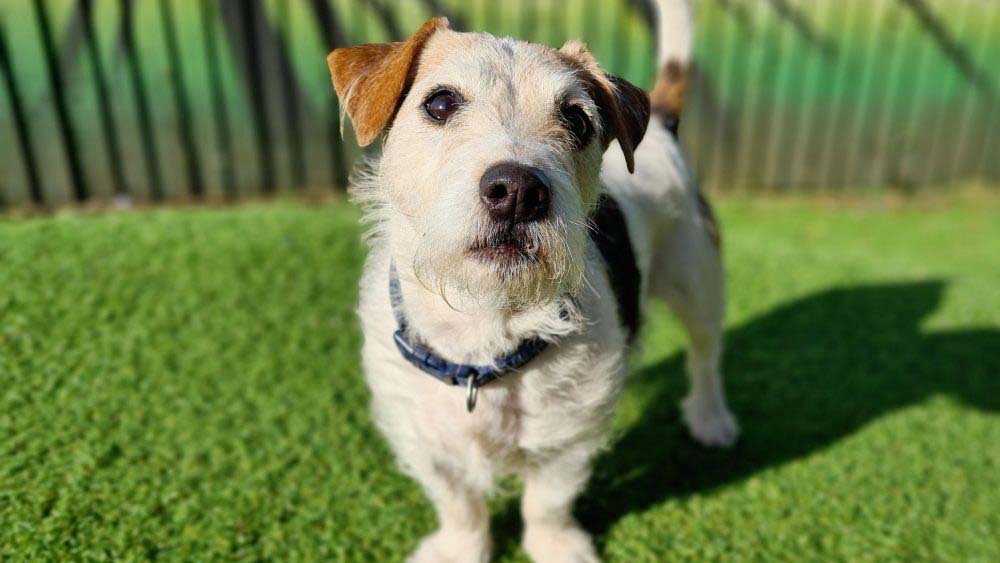 Olly is a 10 year old Jack Russell boy. He is looking for a quiet adult only home to live out his golden years.

Olly is a wonderful boy who likes affection on his own terms and certainly doesn’t want to be a lap dog. Olly can be very protective of his food and toys, he will need a family who will understand this and be open to working through his issues with a behaviourist and putting things in place for him so that he feels secure and comfortable.

He will require a garden as he enjoys a little potter around the sensory garden here. Olly will also need an experienced home, and unfortunately we will not be able to place him with first time dog owners.

PLEASE CONTINUE TO READ BELOW “This is a write up that was written for Olly by a staff member, and I had to share as it describes him in so much detail”

“I’ve been thinking a lot about this little man. He’s the same age as my boys, and it seems so wrong to see him in kennels when he should be all snuggled up in a home. Olly has been at CDH for a little while, and unfortunately, he’s with them because he’s a little more challenging than the average “small dog” is deemed to be.

The phrase most often used to describe Olly is a “grumpy old man” and that’s incredibly accurate. Now, you may read that phrase and imagine an old boy who looks at you like you’ve grown a second head when you suggest he should go outside before 10am, but Olly is a little more than that. He struggles with resource guarding. Unfortunately, this means that with the wrong handling, he would be a bite risk. “Why are you trying to rehome a dangerous dog?” I hear you ask. Well, Olly is not a dangerous dog. Let me translate with a human situation. Imagine you had a plate of your favourite food, you’re midway through eating it and it’s the best food you ever ate. Then, someone took it from you. They don’t tell you why, but your food is gone and your day is ruined. You’d probably throw some expletives their way and, if you’re really miffed, possibly some cutlery too. Olly is just more towards the cutlery-throwing end of that scale.

Although with Olly, this doesn’t just apply to food. He’s like the weird kid at school with the motto of “if I lick it, it’s mine.” Once he’s decided that something is his, you’ve just got to leave him to it. If you’re in the position where you need that-thing-he’s-decided-is-his back, unfortunately you’re going to have to pay him for it. He isn’t one for haggling either, he certainly won’t trade your left shoe for a dry dog biscuit, but for sausages? He’ll think about it. Try to take his stuff without paying? Enjoy your bite injury.

This might sound a little extreme. But sadly, when people look at dogs like Olly, they see a cute small easy dog and don’t think that they have to respect his boundaries. More than one family have taken him home and vowed to work around his issues, and have had to return him to the kennels because they weren’t able to do so.

Olly doesn’t like to be picked up, he won’t wear coats, and he hates being towel dried. Jack Russels are hardy beasts, and rain doesn’t bother them. But how do you dry him, you ask? Provide him with a towel and he will roll around like a horse in a dust bath. He might miss the towel and do this on your carpets. But at least he’s dry and you got a section of your carpet cleaned!

You’re probably reading this thinking that nobody could ever want this small, possessive oddball, but I’m inclined to think differently. Olly is an absolute gent when he isn’t foraging for forgotten food and then refusing to give it to you. He walks wonderfully on his lead, and is generally happy around people and visitors, but would prefer to be around adults only. He communicates his feelings very clearly if you know what you’re looking (and listening!) for. Children however, may miss these signals so he won’t be able to live with kids, or be in an environment where children would visit the home.

Olly needs someone who will let him rule supreme over the household, respect his boundaries, and work towards an environment where he’ll allow you to co-exist harmoniously with him (yes, I did mean to write that this way around). This could be a long process. You might be happy with it being a long process, or you could team up with a positive-reinforcement trainer to help you regain some control of your home faster. Yelling at Olly (or using any kind of punishment) will very likely make this elderly bonehead do everything in his power to work against you. For the right people, this boy will be so, so special. In the wrong hands he’ll probably make a deal with the devil and torment you for the rest of your lives”

You can help rescue and rehome our dogs.

Volunteer to walk one of our dogs.